What some of our clients have been saying

It was an absolutely fantastic experience. I am sincerely grateful to you and to Catalin for the adventure in Bulgaria and Romania. The route we took …

Stefan and Catalin were fantastic guides, with a great passion for Romania’s history, culture and people. The first two days with Stefan were long, bu …

This was a tour I booked at the last minute. What I liked about the process was that I had immediate feedback from your company on any questions I had …

World-famous for the “Dracula” legacy in Transylvania, Romania offers a spectacular history and a fascinating culture deliciously appealing to anyone seeking an exciting adventure.

If you have a passion for diverse culture, Romania will captivate your senses like no other. From the vast array of architecture in each different region to the scenic mountains, plains, Black Sea and Danube Delta, Romania offers a unique and exciting twist to your quest for adventure.

You’ll have your feet swept away as you begin your journey “off the beaten path”… in remote areas of Romania very few people on Earth have yet discovered. You have the option of visiting any of the 32 UNESCO World Heritage sites, filled with locals who love sharing their story and heritage with travelers like yourself. Take part in their well-preserved traditions get the full experience of what it’s like to be part of their culture.

Most “typical” tours stuff you on a tour bus with dozens of other people… rush you throughout each location and herd you like cattle. You’ll miss the most exciting parts Romania has to offer and come home unsatisfied and disappointed.

Instead, we’ll take you deep into the heart of the country with your own privately designed tour, private driver and tour guide. Plus you can customize your experience with an itinerary built specifically for your based on the way you like to travel and particular interests you have.

If you’re going to travel through Romania, do it right!

There are many options to choose from. You can also feel free to get in touch with us to create a customized tour for you, traveling privately without groups or “buses”… and at a very affordable fee well worth the flexibility and privacy of a custom, private tour.

Please review the options below and click on the “get more information” for the one that is a good starting point for you.

Begins in Bucharest, then proceed to Sibiu, stopping at Curtea de Arges and Poienari Castle.
Explore Alba Iulia, tour the salt mines at Turda, then cross the Carpathians toward Maramures. Visit a traditional market and absorb the old-world atmosphere.
Discover Maramures and its wooden churches and then, in Bucovina, visit the UNESCO World Heritage Painted Monasteries and learn about the ancient art of egg-painting.
Visit the home of a Gypsy family. Drive through the Bicaz Gorges to Sighisoara. Spend time in Viscri, an exquisite Transylvanian village; tour Bran Castle, Peles Castle, and the Azuga Rhein Wine Cellars.
Continue reading → 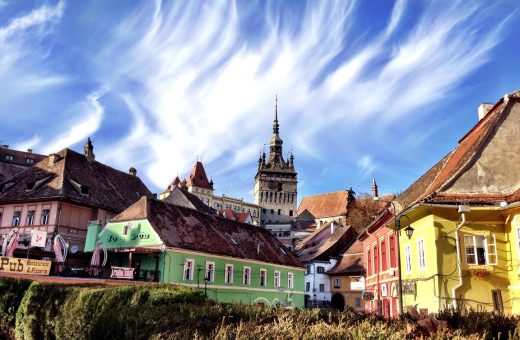 At Curtea de Arges, visit the surreal 14th-century monastery; at Poienari Fortress, take photos of Vlad the Impaler’s forbidding center of command.
In Sibiu, tour the fortified Saxon city; then explore medieval Sighisoara.
Proceed to magnificent Bran Castle and Brasov’s Old Town. Sample some Transylvanian traditional food. Next, visit the elegant Peles Castle and Sinaia Monastery before winding up your tour on the islet of Snagov, believed to be the final resting place of Dracula.

Dark legends, priceless monuments, and fascinating historical revelations are revealed as you travel deep into the Transylvanian countryside.
Begin your tour in Bucharest, then make your way to Curtea de Arges. At Poienari Fortress, take photos of Vlad the Impaler’s actual castle. In Sibiu, tour the most fortified of the region’s Saxon cities before heading to the impressive Biertan Church.
In Sighisoara, climb to the beautiful Clock Tower. In Brasov’s Old Town, admire the Black Church; proceed to the legendary Bran Castle and Peles Castle, the elegant 19th-century royal residence. Continue reading →

Begin your tour in Bucharest, then proceed to the lavish Peles Castle for a guided tour. Next, visit Sinaia Monastery and Bran Castle. In Brasov’s Old Town, take a guided walking tour of the old town.
Next, drive across the Carpathians, passing through “Szekely Land.” Continue your journey along the breathtaking Bicaz Gorges.
Tour the famous UNESCO World Heritage Painted Monasteries and visit a local museum to learn about the ancient art of egg-painting.
On the way to Bucharest, visit the Nicolae Popa Ethnographic Museum and the monumental 14th-century Neamt Fortress.
Continue reading →

What some of our clients have been saying

Stefan and Catalin were fantastic guides, with a great passion for Romania’s history, culture and people. The first two days with Stefan were long, bu …

I want to thank you for arranging a wonderful trip for Jerry and I and selecting Val as our guide. It was a fabulous itinerary enhanced by many fun an …

It was an absolutely fantastic experience. I am sincerely grateful to you and to Catalin for the adventure in Bulgaria and Romania. The route we took …

see testimonials
Customize tour itinerary at no extra charge so you can travel at your own pace, seeing only the sights you want to see, when you want to see them...
Get your own exclusive, licensed, local tour guide with private transportation who speaks fluent English and will show you what Bulgaria and Romania really have to offer...
Gain increased flexibility with the ability to change your schedule "on the fly", at no extra charge, even after the tour has started...
Feel safe and confident knowing that our customers praise us for our speed in communication, personable service, flexibility in planning, and great tour guides...
see testimonials